I arrive at just before 10am and the town square is still quiet – a few traders setting up for the day. But activity gathers very quickly. Beside the main marquee, on a truck, is what will become one of the main attractions – everyone wants to climb up onto it and have their photo taken. It is not Dionysus, but not merely a satyr. The bunches of grapes draped over the sides of the cart certainly point to Dionysus, but the floppy ears suggest something far more satyrnine – and the hooves are cloven! In this respect he is perhaps closer to Pan! The phalloi on offer at the stalls have a local, home-made quality, mostly made of clay, (though there are also some (Chinese?) plastic/rubber dildoes,) and there are plenty of phallic lollies and chocolate willies – things made easily in a mould.

The centrepiece of the event, at the middle of the main marquee, is the real fire under a great old iron cauldron full of green Bourani soup. Bourani is a thick, oil-less, spinach-based soup served on Clean Monday in Tyrnavos, and has given its name to the Festival, too.

It is usually in late February or early March, 7 weeks before (Orthodox) Easter.  Any relationship with Ancient Greek Phallophoria, in honour of Dionysus, in early or late Spring, is as conjectural as a relationship between Guy Fawkes night and the Celtic Samhain.  Syncretic religious festivals are by nature moveable feasts.  The first written records about Tyrnavos’ Bourani festival date from 1898 – seventeen years after the creation of the modern Greek state after its mountain rebels liberated the country from the Ottoman Empire, of which it had been a province since the mid-15th century BCE.  [After the sacking of Constantinople and the fall of the Byzantine Roman Empire in the first years of the 13th century, the whole region fell to the Ottomans over the following two hundred years or so.]

The cauldron is stirred constantly with a big old ladle, and around it people began dancing from shortly after 10am as the PA system cranked up and began blasting out traditional Greek choral dance music. The ottoman edges to the sounds are hypnotic, the gradually increasing rhythms mesmerising. After initial excitement walking round and round the square, I settled down in a seat outside one of the cafes for an espresso fredo, and to drink in the atmosphere as the square filled up with people. Soon the square was heaving!

Everyone wants their photo taken with Satyr – the old men, the kids, and the women. People take it in turns to stir the Bourani cauldron too. When the women stir the cauldron, the old men gather round, waving Phalloi in their faces, and lift the women up – often with an arm between their legs – so that they can stir the cauldron from above. The crowd roars approval every time.

A Greek brass band finally strikes up, and the live music really gets the dancers going. Its quite a spectacle! At last the Bourani is served in little plastic bowls – to anyone who wants some. With all that fun, laughter, and history stirred into the pot, I couldn’t resist: it’s salty, wholesome, and delicious! 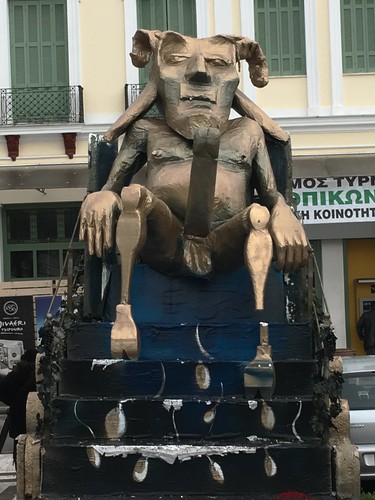