What an extraordinary day at Izumo Taisha. This is probably the most important Shinto Shrine in the whole of Japan, if only because of the extraordinary festival which takes place here every year in the lunar month that broadly coincides with November. This month is known as the Month of No Gods. This is because all the Gods of Japan, kami from shrines large and small, in cities and in the countryside, from riversides and mountainsides, all leave their own shrines and come to gather for a festival at Izumo Taisha. The eight-day festival begins with a marvellous welcoming ceremony, which I had to miss because I was in Tokyo, but ends with a marvellous departure ceremony, which happened today, at 4pm. I felt so privileged and blessed to witness it. There was a French photographer here, accompanying a Japanese Tourism development officer, who had impeccable English, and whom I met at both the Museum and at the Shrine itself. I think I saw one American, too, briefly. Other than that everyone here was Japanese, and the ‘crowds’ were not thick, albeit that the place was clearly busy. This was a religious festival for the religious, although there was plenty of laughter and informality in between the more sober moments.

A bit like religion all over the world (Catholicism is markedly similar) it is also a bit of a racket, with every worshipper throwing coins into the offertory to accompany each prayer – a genuine offering for sure, but always monetary – and the ranks of official shops beside the shrines selling an incredible range of little tokens, with embroidery and other designs, each a special form of ‘good luck’ for a range of circumstances. You can buy a good luck charm for the health and safety of your family, or for good fortune when taking an exam. There are special booths where a monk will write in formal lettering a prayer for you that you can post on special racks, that are literally covered in such messages, for the kami to read later, one supposes.

But such commerciality – common to any religion – really did not subtract from the serenity and seriousness of the reverence which all visitors to each of the many shrines that make up the Taisha were clearly giving. I relished the opportunity to share in such reverence, repeating what I had learned at Ise. Here – I don’t know whether because it is Izumo Taisha, or because of the auspiciousness of this particular day – the worshippers clap four times, not twice, and I quickly picked this up and changed my own routine to fall into step. The leading deity here is Okuninushi-no-kami, the deity in control of the unseen world, and – most especially at this time – the deity of ‘en-musubi’, the connections that bind us together. At this special festival of the gods, each year, the meetings which take place are to determine what ‘en’ – which connections between people – will best fit the future year. Pilgrims to Izumo Taisha at this time, then, pray for their relationships to be noticed and to be granted favour by the gods in the coming year, pray for those who are most special to them, and pray for new connections that will advance them.

Also special to this place is the Magatama. The Magatama – of which many examples have been found by archaeologists from all periods of the known (and many) incarnations of this ancient shrine, as far back as c2000 years ago – represents the overlapping shapes of the sun and the moon. It is a symbol of the universe in one go, described in the English subtitles in the Museum as a ‘comma’ shape, rather than a teardrop. I’m not sure there is any relation to the Tao at all, and did not see this mentioned anywhere. Even where I saw two together, in reverse relation to each other, it was on a modern welcome mat at the door of one of the many crystal shops, and the two Magatama were not joined as with the Tao. Furthermore, unlike the white dot in the black teardrop of the Tao, (and vice versa), the hole in the Magatama seems not to represent the entrance of an opposite. The Magatama already incorporates both sun and moon. The hole in the Magatama is said, rather, to symbolize the blessed spiritual power provided for each one of us through the link with our ancestors, to whom we owe our life. The mystic deep green colour (midori) whether in full, or in streaks, signifies the constant movements and growth of life – the renewal of fresh shoots and sprouts, the leaves in spring, the evergreen trees in the wind. Moss Agate, with its pearly translucence and its green streaks, symbolises Power, and a Moss Agate Magatama, the Power of the Universe in movement and life.

At 4pm, the ceremony of the departure of the Gods took place. There were two classes of officials – I guess ‘monks’ and ‘priests’ – in two different sets of garb.  The former policed the area, keeping the (obedient) tourists in their place.  Those with the money and foresight had booked seats within the shrine. The rest of us had the benefit of being able to take pictures – from outside.  The latter officiants wore the most exotic garb, and undertook the ceremony.  Below are two short videos I took of the ceremony, one when the priests returned from a brief excursion with something special to bring to the ceremony; the other at the end when they departed.  The best thing about it, from outside, was the drum and flute that seemed to accompany on the most important moments. 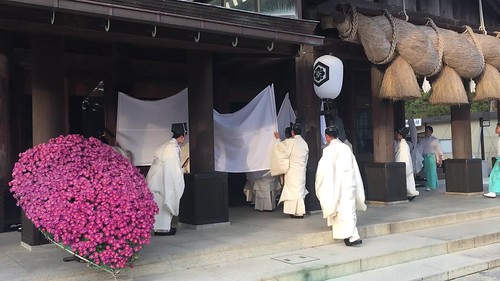 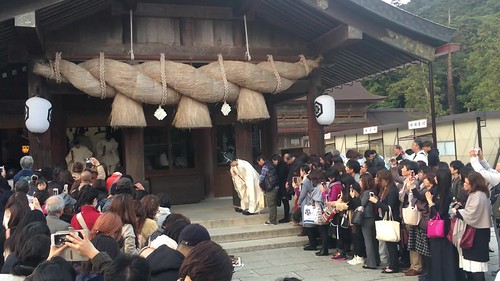 This was an extraordinary day – a stand-out highlight of my trip to Japan.     I feel I have experienced something truly, authentically Japanese today, something very old and still continuing.  A privilege indeed.

[Full tally of photographs from the day on Flickr]