Interesting day.  Got pulled over last December and fined for speeding on the M60. Had to surrender my licence to be amended and reissued.  Only rememebered on the plane that I hadn’t received the replacement yet – four months later!  So I’m not able to hire the car I reserved with Hertz, and, after a brief warning chat with the Tourist Info point here in Alghero about daring to speak to the Italian police, I am clearly grounded in Alghero, reliant on the scant bus services.  Ah well.  Lots of excellent food and wine shops and an opportunity to cook a pasta di frutti di mare. Yum! Sauteed the polpo (octopus) until tender while I ate the fresh local aspargus – lightly steamed – with garlic butter.  *licks lips*

After dinner I heard a band outside the window of my little studio apartment in the old town and leant out the window to see what was going on.  It was a parade of some sort – with candles, and therefore probably religious. I put my coat on to go downstairs and follow.  The procession, led by the band, included a tall effigy draped in a black cloak – it had to be the Madonna – and was followed by what was clearly mostly local people with a few tourists at the edges.  I joined the locals, and followed them down through the winding streets of the old town and eventually into the church.  I followed two young lads, taller than all their elderly relatives, but seemingly just as devout, right up until they joined some of their peers in a side chapel of the church – I guessed they were teenagers who had been choirboys.

I stood off to one side in the shadows at the side of the church, as the main congregation clustered around the effigy of the Madonna, resplendant in a magnificent cloak, but somehow not that dissimilar from a shop-window dummy in a white dress and black cloak.  As the Latin and the Italian chants around me played themselves out, I thought about Italy as the home of the Roman Catholic Church, of the pride of the Italians in leading a billion or more christians around the world.  I thought of the golden idols that Moses threw down and how he might view the worship of this shop-window dummy of the Madonna.

As the ceremony came to a close I turned, but before leaving picked up a tea-light at one of the many candle-stations and lit it, tracing the pentacle with my finger on my forehead, and saying a little prayer to the (local Sardinian) Goddess, knowing that She was here, thousands of years in the making, regardless of what the priests might say in a language long dead, of a man who died thousands of miles away…

I returned to my little studio, stopping off on the way to buy a bottle of Limoncello, and as it chilled in the freezer, enjoyed the single MonteCristo I bought at the same time, delighting in the joy of being stuck in a little town on a little island in the Med, with nothing to do.  What luxury!

BTW: Despite Sardinia being the home of Tiscali (its President is Tiscali’s CEO or smthg) there is no WiFi anywhere in Alghero, and only 90s style pay-for-10mins access to the internet on slow-as-tractors ancient XP machines in photocopy shops.  So blogging is going to be strictly an iPhone affair. And what a bloody pallaver that is!  Text is easy, but an image???!! Running my own installation of WordPress on my own server, (and I’m not sure that that is the problem, just saying) I cannot add (using my iphone) an image to WordPress from my iPhone (it requires Flash) or, via the URL option, from my me.com gallery OR my flickr gallery (just get a red X – presumably these galleries require signup of some kind.)  Where to put a free access photo then?  Couldn’t FTP anywhere it on international data connection.  Stumped.  So much for Web 2.0!!!

02 fortunately can’t charge me more than £35 for data roaming – up to 50Mb.  Good job considering how many pics of my dinner I’ver sent from my iPhone to various so-called Web2 spaces.  So if I go quiet – you’ll know why!  Any advice welcome!! 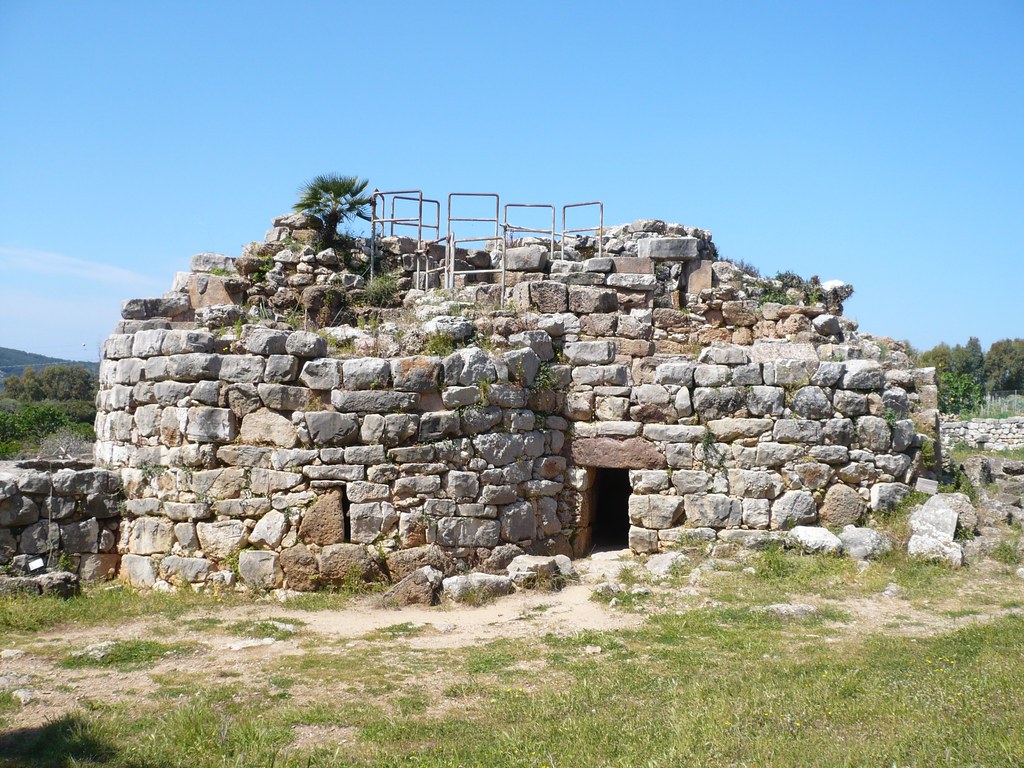 Visited a Nuragic tower and settlement today – Palmavera.  Fascinating.  In occupation roughly 1500BC to 900BC.  There are all the hallmarks of the typical Sardinian Nuragic tower, surrounded by huts.  This is a Class II example, with a double central tower rather than the simpler single tower, or the more complex (Class III) multiple tower examples – most of which are in the south.  As usual I have acquired a rather academic archaeological book in advance to read up on the culture in advance, as well as purchasing, today, the book on the site available at the ticket office. The guides seem to assume that the towers were the dwelling places of chiefs, surrounded by the lesser people in their huts.  Even in the article criticising previous attempts to suggest colonisation from the Eastern meditteranean must have been the origin of such comlpex architecture, supporting instead the idea of a developed local megalithic culture, the assumption remains that these towers are the dwellings of chiefs.  Yet everywhere, unexplained, and glossed over, there are miniature models of these towers.  In the huge round ‘meeting hut’ here at Palmavera, (as found elsewhere), where there is a bench all the way round the inside of this largest of all the huts, and a central pedestal, the item on the pedestal, the focus of the meeting, is a model of the tower – yes the one that is just outside this meeting hut.  In all the archaeological digs, little hand-held or window-sill size models of the tower are found from the period.  It strikes me, I have to say, that one hypothesis archaeologists might do well to investigate would be that these towers were not dwelling places at all – at least not of the living!  It strikes me that these towers were ceremonial places, and if utensils have been found there then they may have been offerings, or there may have been feasts in these towers.  Inside, the conical corbelled roof reminded me of Newgrange.

After Palmavera, I cycled on to Anghelu Ruju, an older – pre-Nuragic necropolis with more than twenty tombs, and evidence of multiple burials from the end of the Mesolithic right through the early Neolithic and up to the Nuragic period.  They were hollowed out from what seemed like a limestone shelf, eerie, ancient, sometimes square, sometimes circular, covering many centuries of use and reuse.  In one, there was a doorway at the end of the entrance passage, flanked clearly by crescent-moon like bulls-horn reliefs.  It was a very potent image of the deepest past, and struck me that perhaps these dark, enclosed spaces where the spirits dwelled might indeed, in the Nuragic, have become the heart of the new-style settlements : no longer perhaps specifically burial sites, but the dwelling places of spirits whose cults had begun in the necropolises.  Idle speculation perhaps.  Amateur archaeology, certainly.  But what delightful weather to do it in 🙂

Interesting Update:
See this for some news on the Nuragic culture!